Recently Carnation launched a Vegan Condensed Milk and it inspired me to attempt to make a real delicious vegan fudge. I’ve already made a Vegan Coconut Fudge using a canned coconut milk – sweetened condensed coconut milk but I wanted to create something with different flavours or as authentic as our typical Slow Cooker Chocolate Fudge.

The Carnation Vegan Condensed Milk Alternative is, as the name suggests, an alternative to condensed milk that works in the same way as condensed milk, to offer a great vegan substitute for condensed milk in recipes. It’s a completely vegan dairy free product.

Because the Vegan Condensed Milk isn’t quite the same as the typical condensed milk we would use, the slow cooker fudge that we’ve created isn’t the same as non-vegan fudge. You couldn’t create an exact replica without using some sort of milk in it.

But, having said that, it is a really delicious alternative and if you like vegan chocolate then you will like this homemade vegan chocolate fudge. It’s a great dairy free option for people that can’t have fudge with milk in it.

What chocolate do you use for this dairy free fudge?

Dairy free chocolate generally has more cocoa solids than chocolate with dairy in it so I’ve had to try this recipe a few times to get it right. If you use all milk chocolate the fudge will turn out quite rich as if you’d used dark chocolate so for a more milk chocolate fudge consistency you need to use a mix of milk and white chocolate.

For this dairy free fudge it doesn’t make a difference if the chocolate is at room temperature or used straight from the fridge and you can use bars or dairy free chocolate chips, whatever you prefer or have to hand. For reference, we used Free From Kitchen chocolate for this recipe.

This easy vegan slow cooker fudge keeps well in the fridge, in an airtight container for a couple of weeks. The flavour matures over the first couple of days of it being in the fridge so you get the full flavour after it’s been in the fridge for a few days.

We always cook fudge on a high slow cooker temperature setting and it takes around 40 minutes in total. You could make it on the low setting but it would take longer and would still need to be stirred regularly. You may as well keep the slow cooker on high and be done in under an hour! Don’t worry, as long as you stir it regularly it won’t burn.

If you’re looking for other fudge flavours to try, why not give our Nutella Chocolate Peanut Butter Fudge, Parma Violet Fudge, Condensed Milk Caramel Fudge, Oreo Fudge or Love Hearts Fudge a try? You can see all our fudge recipes to date here.

What equipment do you need to make this easy vegan fudge?

Slow cooker fudge doesn’t need any special equipment to make it, and you probably already have everything you need at home, but this is the equipment we use:

If you’d like to pin or print this Slow Cooker Vegan Fudge recipe for making fudge later you can do so below. Happy baking! 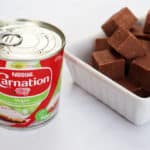