Regular readers may think that I have a bit of a slow cooker fudge addiction having published half a dozen fudge recipes over the last few months. I just love making fudge, and this recipe is the grand finale.

You see, when I was making all the previous recipes I realised that it wasn’t suitable for anyone that was dairy free so I wanted to make a dairy free, vegan alternative so that more people could enjoy slow cooker fudge.

How do you make Dairy Free Vegan Slow Cooker Fudge?

When putting together this three ingredient vegan fudge recipe I was searching for an alternative to traditional sweetened condensed milk and I found condensed canned coconut milk.

This meant I had to stick with a coconut flavour to the fudge and ideally I’d love to find a more neutral flavour condensed milk so that I can make different varieties of fudge. If you know of any alternatives please do let me know. I’ll share more vegan fudge recipes when I’ve found an alternative.

Since the time of writing, Carnation have launched a vegan condensed milk alternative which I’ve made a more traditional flavour fudge using. You can see that recipe here.

When cooking this super easy dairy free fudge it doesn’t have the same consistency as our typical slow cooker fudge so, if you’ve made normal condensed milk fudge previously this is something to be aware of.

As we used coconut milk it’s very oily and the fudge has a really oily consistency whilst cooking in the crock pot and it’s only right at the end that the mixture transforms into a nice, creamy consistency. Bare with it until you get through the coconut oil phase – it’s worth it!

This slow cooker home made fudge keeps well in the fridge, in an airtight container for a couple of weeks. The flavour matures over the first couple of days of it being in the fridge so you get the full flavour after it’s been in the fridge for a few days.

If you’d like to pin or print this Vegan Dairy Free Slow Cooker Coconut Fudge recipe for later you can do so below. Happy baking! 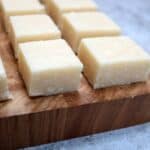