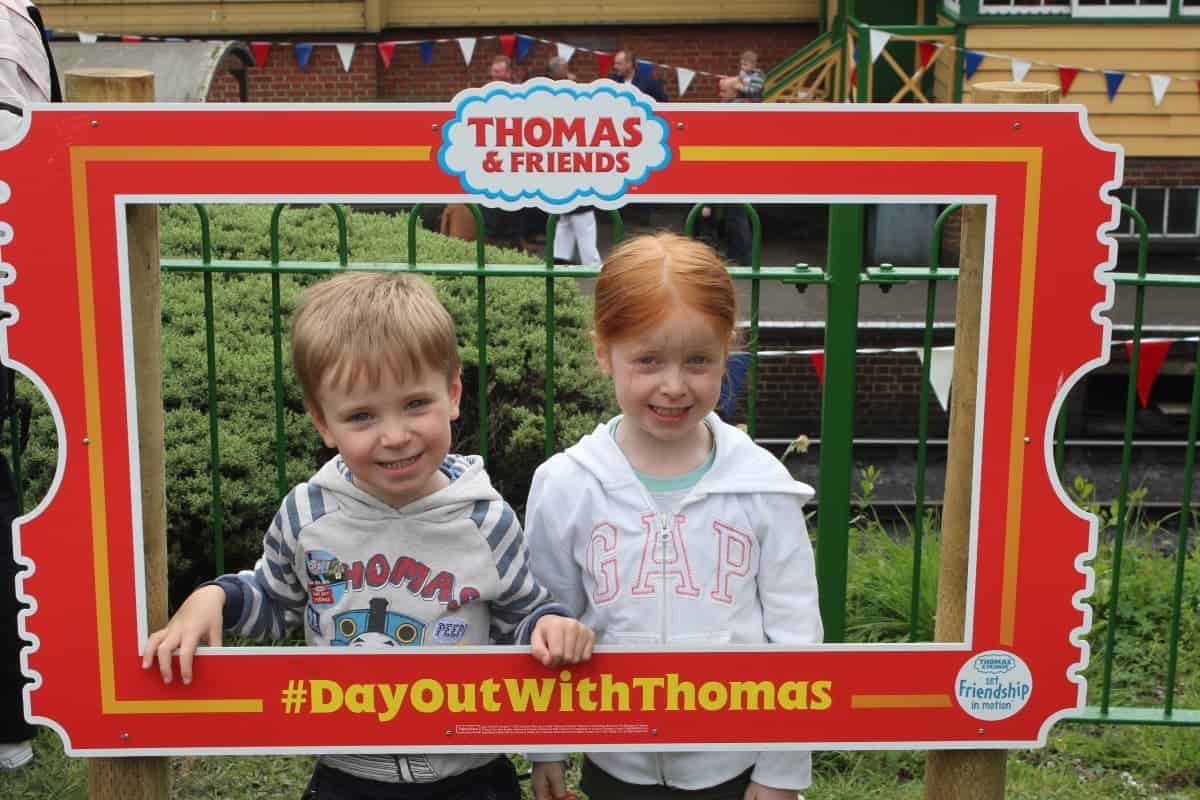 For the duration of A Day Out with Thomas the railway line is taken over by Thomas – with activities at each station, bunting and Thomas shops. The line runs from Alresford to Alton with a couple of stops in between, the main station being Ropley where there is so much car parking and where all the main activities are held – as well as it being the base for the Thomas and Toad trains.

When we arrived at Ropley the children were given a certificate, a passport book to complete activities during the day and a sticker. The passports were a great idea and gave the children something extra to do on the train rides and made them look out for different things along the route – like station clocks and the Fat Controller.

The first thing we did after we arrived was jump on the normal diesel train and ride it to Alresford, where we jumped off, looked in the shop and played in the Thomas toy room that has been set up. The children just loved riding on the train and Dave and I really loved the old fashioned style of the trains, that they were exactly how they would have been back when those trains were in general use across the country. It’s amazing how roomy all of the seats and carriages are – all the seats set out as booths and everyone having a table. It was a much more pleasant train ride than our normal trains going into London and back nowadays.

The trains stop at each station for a few minutes so you can hop off and take photos or look around before getting back on again – or stay for a while and catch the next train in either direction. There are clear timetables on each platform at each station and each platform is marked with what the next station on the route is. Every station was really traditional, quaint and had little seating areas to spend some time. From Alresford we stayed on the train the whole way to Alton, enjoying the journey and watching the different scenery go by out the window.

We took a picnic with us to eat on the train but there was also a buffet carriage selling sandwiches and drinks and most of the shops had basic refreshments in them too as well as a fast food van based at Ropley station.

The trains had toilets on them and it was such a comfortable journey – you could literally ride up and down the track all day if you wanted to but we went back to Ropley to participate in some of the other activities, arriving back just in time for the magic show.

The magic show was held in the marquee on the green and it’s where most of the activities are – with a picnic area and lots of other things to do. The magic show was great fun with singing to warm everyone up before the magic tricks started – and Rusty who did the show even had a puppet friend Verne to help him with the performance. The children absolutely loved it.

After that the children had a ride on the teacups and a turn on the giant inflatable slide – something they could have easily spent all day doing. I loved that rather than just having the trains as the attraction all of the other activities were included in the ticket price and were just so much fun for the children. There was also a play park that was so busy but the children loved it regardless.

We then listened to the Thomas Storytime where a member of staff read a Thomas story to all the children with full audience participation. It was quite a simple activity but the children loved it.

After the story we had a ride on Toad which was one open sided carriage at the end of the train. It took you literally down the track and then reversed back again but it was a nice ride – especially as it was pretty much open air – and the children loved it.

We then crossed to the other side of the platform to have a ride on Thomas – a real steam train although the Thomas engine had been attached to typical diesel carriages rather than Annie and Clarabelle. The children didn’t seem to mind though and loved the journey on Thomas – another ride that just went up the track and then reversed. It would be great if Thomas could go along the whole line from Alresford to Alton but I guess it’s done with just the one station involved to make sure that as many people as possible can get a ride on Thomas and not miss him along the track.

The children absolutely loved their Day Out with Thomas – as did Dave and I. It was such a lovely, family day out and something we would love to do year after year – LP and Little Man have now been twice within the space of a year and have loved A Day Out with Thomas just as much each time. It has so much to do and so much variety that I think they will enjoy it for years.

Children of all ages were enjoying A Day Out with Thomas although, despite the event having a buggy park, many people took pushchairs with them. These did crowd the platforms and made it harder for the people using them to get on and off the trains. If I were going on this day out with a baby I would probably use a baby carrier just to make everything that much more easily accessible.

Aside from that, the day out was pretty perfect. It wasn’t too busy, the wait times for Thomas and Toad weren’t very long and the other trains ran really nicely to their advertised timetables. We left A Day Out with Thomas feeling so happy – it really was just a really lovely day.