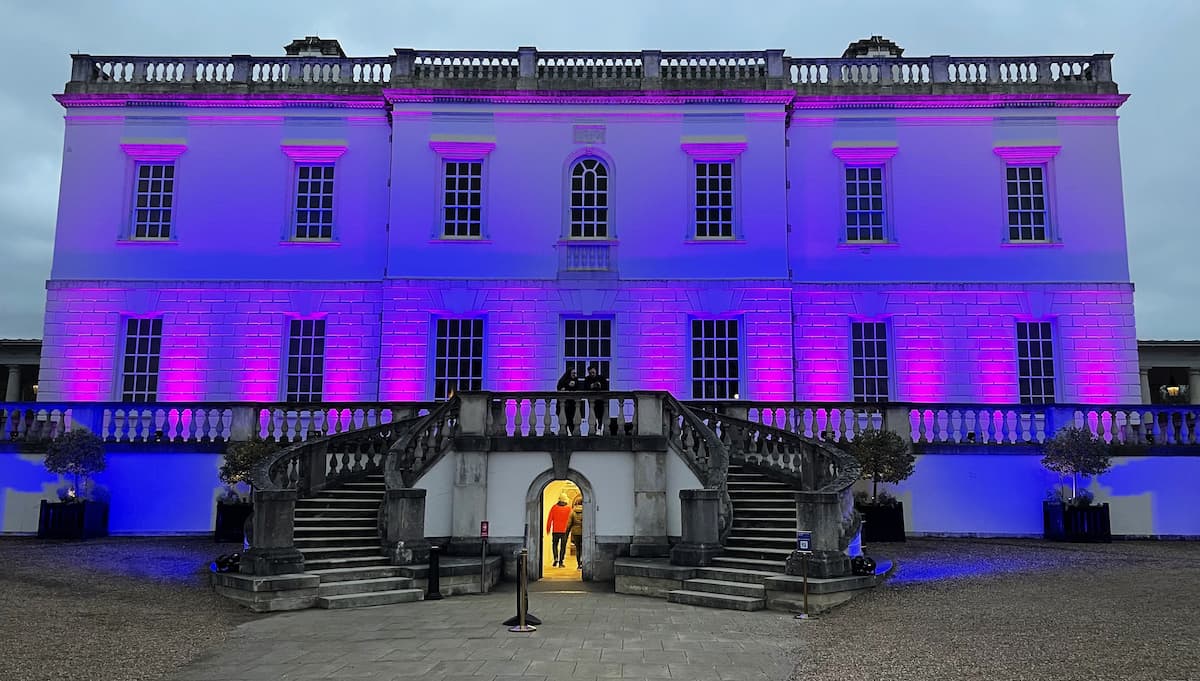 When we visited Greenwich as part of Dave’s 40th Birthday celebrations, we made use of our newly acquired membership of the Royal Museums Greenwich and booked slots to visit the Cutty Sark, the National Maritime Museum and the Royal Observatory, places we had visited in years gone by. One place we hadn’t been to though, is The Queen’s House.

As the name suggests, The Queen’s House is a former Royal residence, steeped in royal history. It was built between 1616 and 1635 for King James I’s wife, Queen Anne of Denmark. Queen’s House is the first building in the country to have been built in the classical style, designed by architect Inigo Jones, and it is on the same site as the Old Royal Naval College, just a stone’s throw from the National Maritime Museum and collectively a UNESCO World Heritage Site. No longer a royal residence, it is now home to an internationally renowned art collection.

Entry is free, but we needed to pre-booked our time slot, so we decided to coincide it with a trip to the Christmas Ice Skating rink that sat directly in front of Queen’s House, leaving us about an hour and a half to walk around at our own pace which was plenty of time.

When we arrived we were checked in by staff who gave us the opportunity to download an audio guide to our phones, but we decided to meander around and concentrate on the areas that most piqued our interest. We followed arrows around the building that lead us to each gallery. This one way system made sure it didn’t get too busy at any point.

We came to the Great Hall on the ground floor and were in awe of it’s perfect cube interior and the restored ceiling by Turner prize winning artist Richard Wright and his team in 2016. The black and white marble floor is original to the 1630s and is still beautiful to this day. The ground floor also hosts temporary exhibits and had Modern British Art when we were there.

Amongst the collections inside Queen’s House, we got to see all three of the surviving versions of the Armada Portrait of Elizabeth Ist side-by-side for the first time. The differences are notable in the colours used, the more lifelike visage of the Queen and the backgrounds depicted.

We were also treated to artworks from the private Woburn Collection, currently on loan to Queen’s House which includes works by Rembrandt, Canaletto and Gainsborough. Exhibitions include ‘Faces of the Navy’, ‘The Loggia’ and the ‘Queen’s Presence Chamber’ with it’s magnificently painted ceiling depicting the story of Aurora dispersing the shades of night, replacing an earlier image of Daedalus and Icarus. No-one knows who painted it but we do know that it was installed sometime in the 1640s.

Inside Queen’s House, we also found the beautiful Tulip Stairs, the first geometric self-supporting spiral stair in Britain, integral to the design of the building. They go from the very top of the house and down to the Undercroft which is where we found the shop and exit.

Ice Skating at The Queen’s House

We finished our trip with ice skating at Queen’s House. The outdoor ice rink was well managed and a format that will be familiar if you’ve ever been to temporary ice rinks. We had a time slot booked and when we arrived we swapped our shoes for ice skates and waited for the rink to be cleared and our session to start.

We made our way onto the ice and followed the direction indicated. Everyone skated in the same direction and there were penguin skate aids available for young children to hire at an extra charge to give them more confidence on the ice.

The ice skating session was just the right length of time, and we ended up leaving slightly ahead of time as they children were really tired. The ice did get quite busy at times so it’s good to know that numbers are limited. There were staff on hand if we needed anything and keeping an eye on the skating, helping people up if they fell and dealing with any minor injuries.