I don’t know anyone that doesn’t love After Eights. That wonderful mix of rich dark chocolate and mint fondant. After Eights always remind me of Christmas when I was small, being handed a solitary mint chocolate in it’s little wrapper after dinner whilst the adults enjoyed their coffee. They’re as reminiscent of Christmases gone by as a big tub of Quality Street!

It always felt like such a huge treat and something savoured over the festive season as well as one of our favourite Christmas sweets. But now I’ve realised After Eights aren’t just for Christmas and they’re not just reserved for after dinner either.

What chocolate should we use for this fudge slow cooker recipe?

Can you refrigerate this slow cooker chocolate fudge?

This also means that the fudge doesn’t last as well in the fridge. If you’re not going to be making it straight away, make sure there’s a whole After Eight Mini on the top of each piece. If any are open, with the fondant showing, the fondant will melt in the fridge. Or, alternatively, don’t put the After Eights on top and then it will store happily in the fridge for a few weeks in an airtight container.

Can I make this fudge without After Eights?

If you don’t have After Eights you could still create a really nice fudge recipe reminiscent of After Eights by using a tin of condensed milk, 500g dark chocolate and a tablespoon of peppermint extract. It would create a really lovely dark mint chocolate fudge you can enjoy throughout the year – not just in December!

Slow cooker fudge is so lovely to give as a gift and this home made fudge would be great as a Christmas gift or an end of term teacher gift. We put the fudge pieces into individual gift bags tied with a ribbon – so simple.

If you’re looking for other delicious slow cooker fudge ideas to try you can find all our fudge flavours to date here and we have to recommend the Terry’s Chocolate Orange fudge, Peanut Butter Fudge and the Lotus Biscoff fudge too!

If you’d like to pin or print this Slow Cooker After Eight Fudge recipe for later you can do so below. Happy baking! 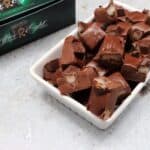