Terrys Chocolate Orange is such an iconic flavour. For me it’s the taste of Christmas, having had a chocolate orange under the tree so many times. It’s a flavour that so many people love so it was only right that I make a Terry’s Chocolate Orange Fudge to add to our slow cooker fudge recipe collection! But, this isn’t just a Christmas fudge for December – it’s a classic flavour that can be enjoyed at any time of the year – we love chocolate orange all year round!

What chocolate do you use for this chocolate orange slow cooker fudge recipe?

If you only have milk chocolate you can use 500g milk chocolate or chocolate chips and a tablespoon of orange extract which would give a delicious flavour in this easy orange fudge recipe. However you make it, this fudge always looks delicious!

Can I make fudge in the microwave?

I have seen many people make choc orange fudge and add orange icing to the top using icing sugar, orange food colouring and grated orange peel or orange zest. There’s also recipes that add icing sugar to the mix or even unsalted butter. You can do that too if you like but I wanted to really give the option of a basic and easy two ingredient fudge recipe that you can then switch up however you like.

The Chocolate Orange slow cooker Fudge Mrs Hinch recipe included a Crunchie bar to add extra texture to the finished treat but, personally, I love nothing more than the traditional, rich and creamy fudge texture in our orange chocolate fudge. But, you never know, I may try a Slow Cooker Chocolate Orange Fudge with Crunchie at some point inspired by the chocolate orange fudge slow cooker Mrs Hinch recipe!

I love making fudge and it is fantastic to give as gifts – home made fudge presented in individual gift bags and tied with a ribbon. They’re something the whole family will love, sharing out the chocolate orange fudge squares over the festive season. It makes wonderful Christmas gifts or at any other time of the year too.

If you’re looking for other fudge recipes to try at home you can find our full range of slow cooker fudge flavours here. The Cherry Bakewell, Peanut Butter and Lotus Biscoff ones are our favourites! We also have a whole bank of other recipes across the website – and some lovely cakes and cookies too!

Slow cooker easy chocolate orange fudge doesn’t need anything special to make it, and you probably already have everything you need at home, but this is the equipment we use:

So here’s how to make easy Terry’s Chocolate Orange Fudge recipe in the slow cooker:

If you’d like to pin or print this Slow Cooker Terry’s Chocolate Orange Fudge recipe for later you can do so at the bottom of the page. Happy baking! 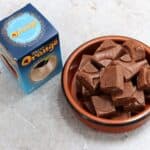