Over the last year or so we have made so many fudge recipes and I love experimenting with tastes and flavours. One of my favourite types of chocolate is Kinder, with that fantastic mix of white and milk chocolate which I wanted to replicate in a slow cooker fudge.

But, using Kinder chocolate bars in the recipe would be incredibly expensive so I created this lovely smooth fudge as a cheaper alternative whilst still getting that creamy mix of chocolate flavours without Kinder bars in sight.

Why should you make this chocolate Kinder fudge in the slow cooker?

Fudge is so easy to make in the slow cooker, taking just 40 mins cook time on a high setting and it lets you have more control over cooking than if you were to make microwave fudge instead as it’s kept at a consistent heat and you can watch over it whilst it cooks. Also, a lot of slow cooker fudge recipes do include icing sugar but we’ve never felt the need.

Although we make this super simple four ingredient chocolate fudge using a slow cooker it really isn’t slow cooking, and it’s pretty quick really! We have a cheap, basic 4 quart slow cooker but you can use any slow cookers or crock pots.

Can you vary this recipe?

You could easily make this into a Kinder Bueno Fudge slow cooker recipe by topping with chunks of Kinder Bueno before putting it into the fridge to set – making it five ingredients rather than four ingredients!

After cooking the fudge takes around 4 hours to set fully but is best when left overnight. The flavour seems to mature the longer you leave it to set too and we find that this fudge has the full Kinder flavour when left until the following morning.

We use a 9″ square baking tin for our fudge recipes but you can make it in any tin you have to hand – just make sure you line it with decent baking paper!

This fudge keeps well in the fridge for a few weeks in an airtight container as is fantastic to give as gifts throughout the year. Plus, it’s something the whole family love.

What slow cooker fudge flavours can you make?

We have made so many different varieties of fudge now and there really are no limits – it’s really down to what you fancy making, what you have in the cupboard and your favorite flavour combinations.

We love a simple chocolate fudge recipe but our favourites have been our slow cooker peanut butter fudge which is amazing if you love peanut butter and Lotus Biscoff fudge which was a winner with everyone who tried it. We even made a slow cooker vegan fudge using condensed coconut milk which turned out so well too

We also have a great salted caramel fudge, cookies and cream fudge and a wonderful maple and pecan fudge. You can see all our delicious fudge flavours to date here. We really love fudge!

If you’d like to pin or print this Slow Cooker Kinder Style Fudge recipe for later you can do so below. Happy baking! 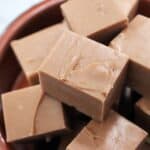