With a dark chocolate fudge you don’t need as much chocolate as if you were making a milk chocolate fudge as the fudge has a higher cocoa content. This recipe uses 300g chocolate compared to our usual 400-500g of chocolate. If you use more you’ll get a much more solid fudge which isn’t as enjoyable to eat.

Can you vary this recipe?

This slow cooker Bourneville Fudge keeps well in the fridge, in an airtight container for a couple of weeks. The flavour matures over the first couple of days of it being in the fridge so you get the full flavour after it’s been in the fridge for a few days.

Can you make this dark chocolate fudge recipe in the microwave?

Many people make fudge in the microwave but I much prefer the control I have when I make it a different way – in the crock pot or slow cooker. If you don’t have a slow cooker, make it in the microwave by putting the ingredients in a microwave safe bowl and heating on short bursts in the microwave, stirring in between. Then follow the instructions as per the recipe below.

Can you make this easy slow cooker fudge with evaporated milk?

Do you cook crock pot fudge high or low temperature?

We always cook our carnation chocolate fudge recipes on a high slow cooker temperature setting and it takes around 40 minutes in total. You could make it on the low setting but it would take longer and would still need to be stirred regularly. You may as well keep the slow cooker on high and be done in under an hour!

This crock pot chocolate fudge is really simple to make and it’s one of our easiest slow cooker recipes to make and any chocolate fan would enjoy it. The kids love to help with cooking this as well as eating it afterwards!

If you’d like to save, pin or print this Slow Cooker Bournville Fudge recipe for later you can do so below. Happy baking! 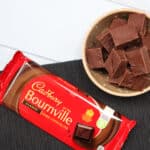