I saw someone make reindeer brownies last year and ever since I have wanted to make reindeer fudge. I’ve spent all year procrastinating and trying to work out the best way of making fudge reindeers – and I finally created reindeer fudge that I was happy to share with you all.

This fudge is made with our most basic, simple fudge recipe. It’s made with sweetened condensed milk and milk chocolate, cooked in the slow cooker for just 40 minutes and then put into moulds and decorated to look like reindeer.

How do you make fudge into reindeers?

The problem with making fudge look like anything is that you need to be able to decorate the fudge once it’s cut into pieces and, as anyone will know that has made slow cooker fudge previously, it’s too firm once set to attach anything to.

Instead, we decided to make individual fudge cubes using moulds – much like the fudge hearts and fudge Easter shapes I made previously – and decorate them before they set. This works perfectly!

The finished fudge is cute but delicious. It uses simple decorations of edible eyes, red Smarties and pretzels that we cut to make antler shapes. It could not be easier – the only tricky bit is filling the moulds with chocolate but even that isn’t difficult, just fiddly.

The children loved this fudge the minute they saw it and have told me I have to make it every week over the festive season. They can’t get enough of it and want all their friends to be able to try it too. Who knew reindeer fudge would be so popular?!

What flavour reindeer fudge can you make?

Our children love easy milk chocolate fudge but there’s nothing to stop you making other flavours of fudge reindeers if you wanted to. Peanut butter fudge would work really well and give light brown reindeer. You could also make festive Baileys fudge reindeer or any other flavour you feel like. You can see all our fudge flavours here for inspiration.

This crock pot chocolate fudge is really simple to make and it’s one of our easiest slow cooker recipes to make and any chocolate fan would enjoy it. The kids love to help with cooking this as well as eating it afterwards!

If you’re looking for other slow cooker Christmas fudge recipe ideas to make, why not try our peppermint candy cane fudge, Terry’s chocolate orange fudge or Baileys fudge? You can see all our fudge recipes to date here.

Our usual slow cooker fudge doesn’t need anything special to make it, and you probably already have everything you need at home, but this is the equipment we use:

For this Christmas Reindeer Fudge, instead of our typical tin that the fudge sets in, we use square moulds. You could also try using circles or triangles – whatever moulds you feel like to get that cute reindeer finish!

If you’d like to save, pin or print this Slow Cooker Reindeer Fudge recipe for later you can do so below. Happy baking! 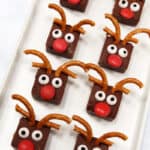