I always ask family and friends what flavour fudge I should make next and Bubblegum Fudge has been a request for quite a while. Little Man loves anything bubblegum flavour and so he was super excited when I finally said I’d make it.

What do you need to make Bubblegum Fudge?

For this bubble gum fudge you don’t actually need any bubblegum! You just need bubblegum flavouring and our typical white chocolate fudge ingredients of sweetened condensed milk and white chocolate. We also use blue food colouring to give the fudge that classic bubblegum colour.

Although we make this fudge blue you could have pink bubblegum fudge or even use two colours of food coloring to give a marble effect. Really it can be any colour you like and if you’re making it as part of a party spread you could make it any colour that matches your theme and still give it that great bubblegum flavor.

We also stir in bubblegum flavour Millions sweets before we put it in the dish to set but you don’t have to add the sweets if you don’t want to – the bubblegum fudge will be just as lovely without it. The Millions just add a nice texture to the finished fudge.

This fudge candy tastes just like bubblegum and if you love bubblegum flavours then you’ll really like this. It’s not something I’m keen on – it’s so sickly sweet, like cotton candy, and just a little too much for me but the kids absolutely love it.

Can you make this simple fudge recipe in the microwave?

What sort of slow cooker or crockpot should I use?

You can use any slow cookers for this home made fudge but if you have an overly large one you may find it doesn’t take quite as long to cook so adjust the cooking time accordingly.

As with all baking recipes you do need to invest in decent baking paper – we’ve found having good quality sheets makes all the difference.

So here’s our recipe for Slow Cooker Bubblegum Fudge:

If you’d like to pin or print this Slow Cooker Bubblegum Fudge recipe for making fudge later you can do so at the bottom of the page. Happy baking! 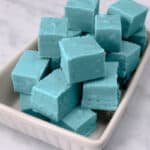 This bubblegum fudge is a must for any bubblegum flavour fan! It tastes just like bubblegum yet has no bubblegum in it, just a sweet treat that kids will love.
Course Afternoon Tea, Dessert, Snack
Cuisine American, British
Keyword fudge, slow cooker
Prep Time 5 minutes
Cook Time 40 minutes
Servings 40 pieces