I wanted to create a Clotted Cream Fudge in the slow cooker without condensed milk. A recipe that instead went back to basics with cream and sugar. After a few attempts we got the mix just right – and have decided that this is our best fudge yet.

What is in Slow Cooker Clotted Cream Fudge?

Clotted Cream Fudge is a mix of clotted cream, sugar, golden syrup and just a little vanilla. During the cooking process it all combines, thickens and the flavour matures, creating a delicious, rich fudge that transports you right back to your childhood.

How to make clotted cream fudge in slow cookers

To make this clotted cream fudge recipe you just need to add everything to the slow cooker pot, cook for a few hours and stir regularly until the mixture becomes thick before beating to thicken the mixture even more. It’s not a hard recipe, just one that takes a little while.

Making fudge without condensed milk was completely new to us but it’s something we’ll be doing much more going forward. Although this recipe needs stirring regularly, it’s simple to do if you’re at home during the day to stir it every thirty minutes and needs much less stirring than if you were cooking this fudge on the hob.

If you’re looking for other delicious slow cooker fudge ideas to try you can find all our fudge flavours to date here and we have to recommend the Terry’s Chocolate Orange fudge, Peanut Butter Fudge and the Lotus Biscoff fudge too!

If you’d like to pin or print this Slow Cooker Clotted Cream Fudge recipe for later you can do so below. Happy baking! 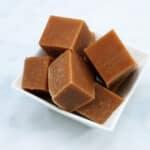