The latest flavour we decided to add to our fudge slow cooker recipes is Rum & Raisin Fudge. It’s such a classic flavour combination and one I know so many people love. I’ve tried to make the recipe as simple as possible and it turned out pretty great.

Do you need to use real rum in this rum and raisin fudge condensed milk recipe?

We wanted to create a family friendly fudge recipe so used rum flavouring which has an incredibly low alcohol content. Also, I didn’t want an overpowering rum flavour and so used just one tablespoon of rum flavouring in the recipe.

Alternatively you could use real rum instead of just rum flavouring. If you do this, you could soak raisins in rum overnight before adding them to the mix. Soaked raisins would add a whole new level of flavour to this recipe!

However, you could add more rum to the mix if you want a stronger flavour. For each extra tablespoon of rum add an extra 100g of chocolate to make sure it still sets properly.

Rum and Raisin is typically a flavour that you find mostly at Christmas but this slow cooker chocolate fudge recipe is definitely one that you can enjoy throughout the year. It would be lovely to parcel up into individual gift bags to give as presents or to take to someone’s house as a little token gift.

Two things you really need to make sure of when making perfect slow cooker fudge is that you don’t let the fudge burn. Leave it for longer than 10-15 minutes without stirring and it burns easily. Also, make sure you line your tin well with baking paper or use a decent silicone baking tray – you’d hate for it to stick!

If you’re looking for other slow cooker fudge recipes to try at home then I have to recommend our Lotus Biscoff Fudge, Peanut Butter Fudge and Kinder Style Fudge but you can see all our fudge recipes so far here.

If you’d like to pin or print this Slow Cooker Rum and Raisin Fudge recipe for later you can do so below. Happy baking! 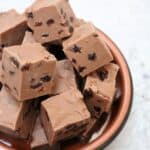