As you know, I love making new fudge recipes and Little Man requested that I try and make his favourite ice cream flavour into fudge. Mint chocolate chip! The problem with using chocolate chips is that they melt really easily so we came to a compromise with this mint chocolate fudge, a twist on mint choc chip fudge and one that he was beyond happy with.

What do you use for this mint choc fudge?

We made a super easy Slow Cooker Mint Aero Fudge recipe previously which worked well as a mint and milk chocolate combination. The Aero Mint chocolate bars and Aero bubbles worked really well so definitely give that one a try if you’re looking for a primarily milk chocolate recipe.

Can you make this fudge slow cooker recipe in the microwave?

What sort of slow cooker or crockpot should I use?

You can use any slow cookers for this home made fudge but if you have an overly large one you may find it doesn’t take quite as long to cook so adjust the cooking time accordingly. As with all baking recipes you do need to invest in decent baking paper – we’ve found having good quality sheets makes all the difference.

This slow cooker mint fudge keeps well in the fridge, in an airtight container for a couple of weeks. The flavour matures over the first couple of days of it being in the fridge so you get the full flavour after it’s been in the fridge for a few days.

So here’s our recipe for perfect Slow Cooker Mint Chocolate Fudge made in the slow cooker:

If you’d like to pin or print this Slow Cooker Mint Chocolate Fudge recipe for making fudge later you can do so at the bottom of the page. Happy baking! 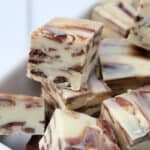