What is Moussaka? How to make moussaka?

Moussaka is an aubergine or potato based dish that originates from Greece and Turkey. There they use really thin potato and aubergine slices – or eggplant! There are now so many variations of the dish with some areas eating it hot, some cold and some serve it at room temperature.

Can you really cook a good moussaka in the slow cooker?

When cooking the Crock Pot Moussaka, make sure that you drain the fat well from the mince after the browning stage. Otherwise this slow cooker lamb moussaka recipe will be too wet and won’t bind as well as it should.

Can you use beef mince for this moussaka slow cooker recipe?

You can use any mince you like for this moussaka recipe but for an authentic moussaka you should use lamb. If you use beef, pork or even turkey mince it will still be lovely but it won’t really be a moussaka!

At the end this easy moussaka recipe should come out of the slow cooker pot almost in slices rather than being too wet. It should be golden brown around the edges and looks delicious! Feel free to make your own béchamel sauce although I have never been able to make a white sauce as well as a ready made one. I happily use a jar in this recipe to save time when preparing the meal.

This isn’t the most healthy moussaka recipe but it’s definitely easy moussaka and it tastes great too. You can add a layer of grated cheese on top if you like or make the sauce richer with a tomato paste added.

Can you make this moussaka lamb moussaka recipe vegetarian?

This would be a much more healthy meal if you wanted to make a slow cooker moussaka vegetarian version. To do this you would just make a Quorn alternative for the meat mixture or just increase the amount of aubergines and potatoes used, leaving the meat out completely and having just a tomato sauce between the layers. This would actually make a really lovely potato and aubergine moussaka so it’s worth a try if you’d like a slow cooker vegetarian moussaka recipe.

What equipment do you need to make a slow cooker moussaka?

For this recipe you will probably have everything you need at home already but I thought it might be useful to show you what we use when putting this recipe together:

If you don’t have a mandolin already then they really are a fantastic investment for this kind of dish as well as slicing onions for whatever meals you’re making.

Here’s our Slow Cooker recipe for Moussaka with lamb:

And if you would like to print or pin this recipe for later you can do so at the bottom of the page. Enjoy! 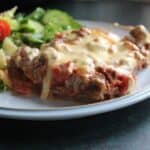 This is a great one pot meal and we usually just serve the slow cooker moussaka with a simple salad although if you love your meals to be carb heavy you could serve it with chips or wedges.
Course Main Course
Cuisine Greek
Keyword main course, slow cooker
Servings 4 servings

We use cookies to ensure that we give you the best experience on our website. If you continue to use this site we will assume that you are happy with it.OkRead more