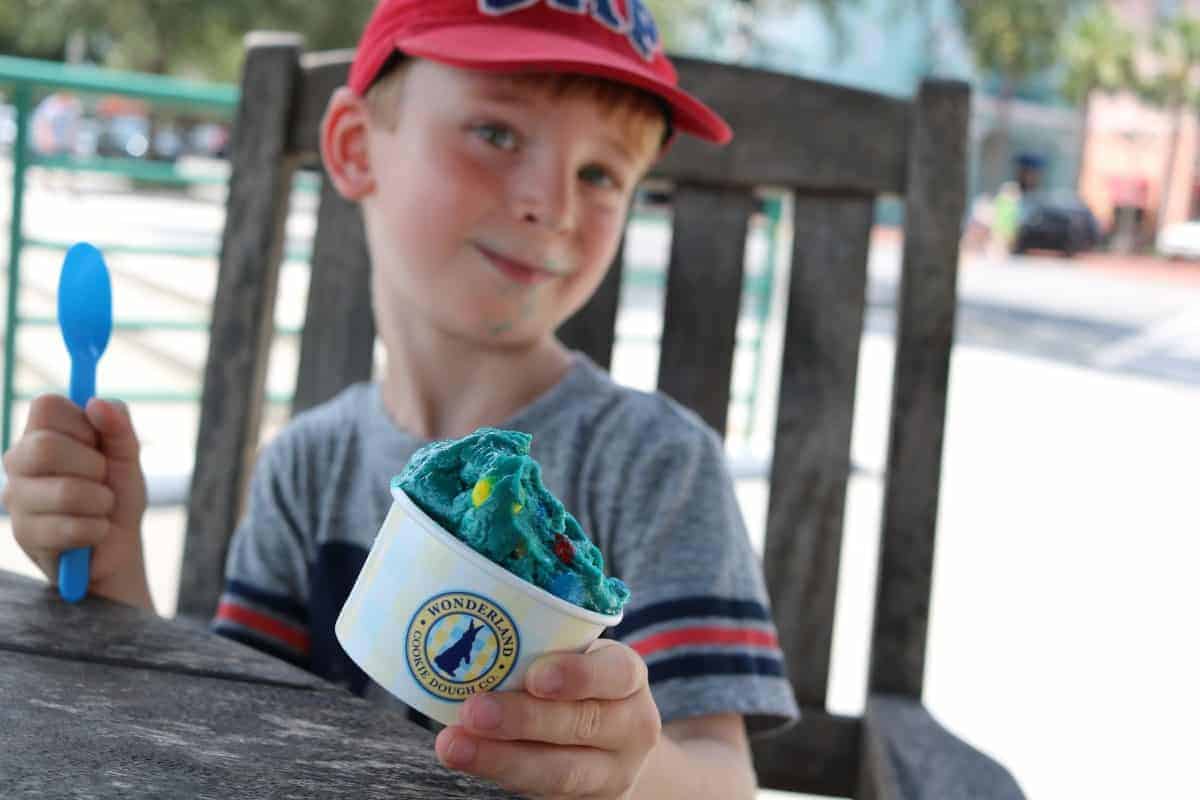 The last time Dave and I came to America was in 2010. It was our before kids blowout holiday to Las Vegas and we had a great time. But, we were in the Las Vegas bubble of hotels and casinos. We didn’t get to actually experience any of America really. So our trip to Florida was eye opening for us. Here are a few things I’ve learnt about America during our trip:

In America red milk is the higher fat milk and blue milk is the lower fat milk. We were so confused for the first few days and had some quite rich tasting cups of tea!

American plug sockets don’t have a switch. You plug something in and it’s on. It makes me wonder why, at home, we spend so much time turning plug sockets off when in America they are permanently on.

Driving around Florida most cars didn’t seem to have dedicated indicators. Instead their brake lights would flash. Red, flashing indicators. That took some getting used to! Plus, they only have number plates on the rear of the cars, not the back – and number plates were state specific so in Florida we were surrounded by ones with oranges on them.

We also found crossroads so strange in America. Instead of giving way to the right like you would if signals were broken at home, you have to give way to whoever was at the crossing before you, and everyone moves in turn. This can get quite confusing if a lot of cars get to a junction at the same time.

As well as ice cream, cookie dough seemed to be quite a thing in America. Whole dessert parlours full of chilled cookie dough in so many flavours. It was definitely something worth trying but not something I could eat regularly!

We had so many ice creams and soon found out that instead of just having an ice cream in a cone you had to choose the type of cone. Sugar cone, cake cone, waffle cone… Ice creams are a huge deal in America.

I had mint choc chip ice cream – and it was white. It looked like cookies and cream at home or vanilla with chocolate chips but unlike any mint ice cream I had ever had. Yet, it tasted perfectly minty. It just shows how we must make our mint ice cream artificially green at home.

There’s so much green space and undeveloped land in America. Spending time in the car we noticed huge stretches of land and it made us realise how built up and developed the UK is. How sacred our green spaces are and how we really don’t have much space spare at all. I doubt America will ever be fully built on.

In America they have pancakes with everything. You can order breakfast all day but even the normal menus let you have pancakes instead of chips with your burger or club sandwich. Pancakes are a staple side, sweet or savoury and they are accepted as something to eat at any time of the day.

We also found that soft drinks in most restaurants offer free refills but still have a pretty typical price. In the UK free refills are few and far between and they bump up the price to compensate for the ‘free’ refill too.

Petrol in America is cheap. REALLY cheap. It cost us $50 to fill up our huge Chevrolet beast of a car yet, at home, it costs us £70 to fill up our much smaller car. You get a lot more fuel for a lot less money in America.

We often passed school buses – which looked just like the movies – but they had the power to stop the traffic which I thought was genius. School buses have flashing red lights and stop signs that pop out from the sides, warning cars to slow down and stop when the bus was stopping to pick up and drop off children. It must really reduce accidents.

In the UK we’ve got used to paying bag tax and also packing our own bags when we go to the supermarket but every time we went grocery shopping a lovely, friendly member of staff packed our bags for us. Sometimes there would be an extra member of staff to pack bags and other times they had a carousel at the checkout with bags around the edges. The cashier would zap items and bag them as they went, turning the carousel when bags were full so we could load them into the trolley. We very rarely paid for a carrier bag – and we never had to put a coin in a shopping trolley either.

But, every time we went shopping the prices on the shelf edge weren’t the price we paid – as everything in America has tax added at the checkout. This is something you get used to really quickly but I have no idea how you’d work out how much your trolley full of shopping was actually going to cost – it was always a surprise!

Also, in restaurants, as well as tax being added we also had a service charge. So, the menu prices got inflated twice and this was typically an 18% service charge. I’m not sure if that was standard or because there were six of us but it definitely made the bill a lot higher than you’d initially expect.

Food in America varies quite a lot too. In America gravy is not what I would expect gravy to be like. It’s white yet apparently meaty and just so different to what we’d have at home that we didn’t even try it. Americans also have something called funnel cake that we saw at theme parks and tater tots – like balls of deep fried mash. Cole Slaw seems to be two words and is like incredibly finely chopped vegetables instead of our chunky coleslaw at home. A Slushee is an Icee in America – but is still bright red and blue. And cheese toasties are grilled cheese – just the same as at home but Americans don’t have simple cheese sandwiches – they have to be grilled.

Carrying on the food theme, we had to have a McDonalds whilst we were there. It was all so familiar but different at the same time. The Happy Meal toys were the same – like, the exact same toys. But, the children’s chips came in a mini cardboard container rather than the little paper bag we get at home. Milkshakes came with whipped cream on top and they had the most incredible burgers – Smokehouse Burgers with smoky bacon-onion sauce. That sauce is amazing! But, McDonalds (and Burger King) are SO expensive in America. We paid pretty much $30 for two children’s meals and two adult meals with no desserts or anything fancy.

I’m used to toll roads at home but in the US they are everywhere! We started programming the sat nav to avoid tolls but if we didn’t it would seem to take us on four or five tolls on each leg of a journey – at anything from $1 to $3 a time. And, you had to have the correct change on some or you’d have to mail them a money order… You can get a toll pass but it costs $5 a day on top of the cost of the toll – which is really expensive if you only end up going through one $1 toll.

The coins in America all look the same. It made me realise that we have so many coins in the UK and they all look so different. But, in the US they are all so similar. Plus, they have quarters which I’ve never really thought about before but it’s like the UK have a 25p coin. How random is that!? No 20¢ coins in the US, 25¢ ones.

In America they didn’t seem to enforce helmets when riding motorbikes. We saw so many people going at such high speeds and weaving through traffic on huge motorbikes with no sign of a helmet. It just looked like an accident waiting to happen.

One thing that amused me in Florida was that all public toilets have toilet seat covers in them. I tried to use one once – it didn’t cover the seat properly, moved around and then had to be thrown away afterwards. It didn’t seem any more hygienic than just sitting on the toilet seat and seemed really wasteful too. Such a pointless exercise but people must use them or they wouldn’t be there.

Wow, it seems like I observed quite a lot in two weeks in America and it just goes to show that even on a holiday where things are so familiar, where you speak the same language and have so many of the same brands in the supermarket, things can actually be really different.