Honeycomb is such a wonderful treat that I thought I would make a simple Slow Cooker Honeycomb Fudge to indulge in at home. We used Cadbury Crunchie bars for this but you could use any honeycomb, chocolate coated honeycomb or even cinder toffee for a stronger flavour.

How do you make slow cooker fudge?

Slow cooker fudge is so simple to make – with just a tin of condensed milk and chocolate. You can then add anything you like to create a whole world of fudge flavours. This simply uses honeycomb candy to add extra texture and flavour.

You can use any slow cooker for this recipe and an instant pot would probably work well too. Make sure you use good quality baking paper so that the chocolate fudge doesn’t stick to the tray – I’ve known people resort to eating it straight from the tin with a spoon when they forgot to line it!

What is different about chocolate honeycomb fudge?

Honeycomb fudge is a great way of using up leftover chocolate bars but there is one thing to be aware of. Honeycomb fudge doesn’t store very well. Honeycomb by nature attracts moisture so if you leave it in the fridge or anywhere too hot and humid the honeycomb will break down and turn sticky.

To keep the honeycomb at that perfect crunchy consistency you need to store this fudge somewhere dry and cool, not in direct sunlight and not in the fridge. It would be great to make for an occasion and sharing out to eat there and then – a real treat to enjoy with friends and family.

Our whole family loves this really delicious slow cooker Crunchie fudge recipe. It’s one of the simplest fudge recipes we’ve made and it felt like such a treat.

If you’re looking for other fudge flavours to try give our Lotus Biscoff Fudge, Baileys Fudge, Peanut Butter Fudge or After Eight Fudge a go. You can see all our fudge slow cooker recipes to date here.

If you’d like to pin or print this Slow Cooker Honeycomb Fudge recipe for later you can do so below. Happy baking! 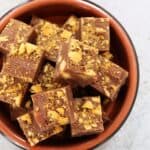