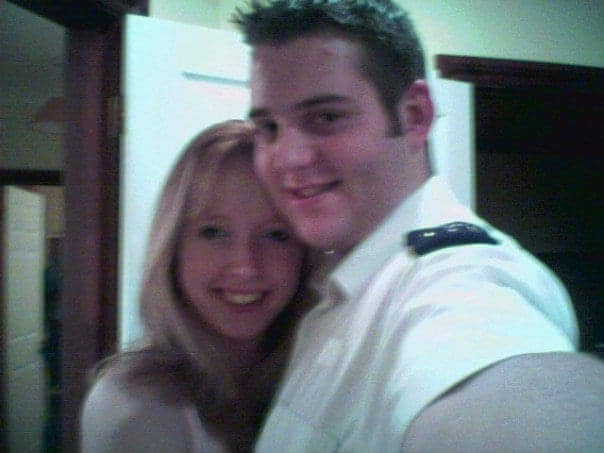 To commemorate our 5th Wedding Anniversary, I’ve decided to have a blog series talking about the ways people met, how they found the love of their life, how their story started. The first post in this series is ours. The beginning of Dave and I.

Back in 2004 I was 19, single, working full time and doing A-Levels at college in the evenings. I was studying psychology and sociology and loved both subjects. Our project in psychology was to complete a study based on The Evolutionary Theories of Sexual Attraction. One dated study looked at newspaper personals columns and compared what men were looking for in a partner to what women were looking for. I decided to update the study and compare what men and women look for in partners with how they advertised themselves on online dating sites.

I signed up to an online dating website and completed my research by looking at the profiles of the closest 100 men and closest 100 women to where I lived. I then decided to make use of the registration fee I had paid and started going on dates through the website.

Over the following months I went on a lot of dates with different people but only ever twice with the same person – I was looking for someone to spend my life with. I was 19 and had been through more than most 19 year olds. I was young but I was ready to settle down. So I went on a date with someone and if I didn’t like them I didn’t see them again – What’s the point in wasting time? If they were nice then I’d see them again. I think I must have been incredibly fussy though as I hardly saw anyone twice and no-one a third time.

Over those few months I went on a lot of dates and loved meeting new people, having a glass or two of wine and an excuse to get dressed up. But I realised that a lot of men online lied about who they were, wanted more than I was prepared to give on a first or second date and ultimately weren’t the kind of people I would want to be friends with let alone be in a relationship with.

In the end I decided to have one last attempt at online dating before calling it a day. I searched for new people – male, between 20-28 within 30 miles of Surbiton, Surrey – Where I lived at the time. I scrolled through the pages of men and one jumped out at me. A man in a white shirt, photo taken on a webcam, 30 miles away in Farnborough, Hampshire. My thought process was ‘He looks nice, where’s Farnborough? Thirty miles away?! Hmmm never heard of it, too far away, don’t drive.’ I turned my laptop off and thought nothing more of it.

A few days later, on 7th July 2004, I was sent an ‘Icebreaker’ through Yahoo Personals. It said ‘Nice smile!’ and was the first contact I had with a man that would become my Husband.

We talked constantly for the next week. MSN messenger, texting and phone calls. I told him so much about me before I’d even met him. I wanted to be honest with him from the start, so that I was an open book and he knew what he was getting into!

On 15th July 2004 I had a half day at work, went and got my haircut and then home to get changed. I walked to Surbiton train station to meet this man I had spoken to constantly for the last week. I was wearing jeans, a denim jacket (double denim, cringe!) and trainers. The sun was shining and I felt on top of the world.

I met David at the station, he was wearing jeans, a white shirt and coat. We had a kiss on the cheek, a hug and then went to the pub. The Coronation Hall. We sat and chatted all evening, drinking, laughing and getting to know each other – It felt like we’d already known each other for so long.

From then we saw each other a couple of times a week, as often as we could depending on his shifts. We went abroad together in the October, spent Christmas with his family and started talking about moving in together as soon as we could.

Coincidentally, Dave used to work for the company that I worked for when we met and still work for now, people would ask how we met and I would say ‘Oh Dave used to work for…’ It wasn’t a lie, it just wasn’t answering the question and ten years ago there seemed to be such a stigma towards internet dating that it was easier to avoid the questions and comments. Ten years later it’s almost irrelevant how we met although I find it amazing that I met the love of my life on a website – One that he was on because of his work shifts and I was on, originally, because of a college project.

So that is the story of us. Follow the blog series over the coming weeks to find out how many more couples met – It will be a regular Friday feature until I run out of couples with a story to share. If you’d like to feature, get in touch!