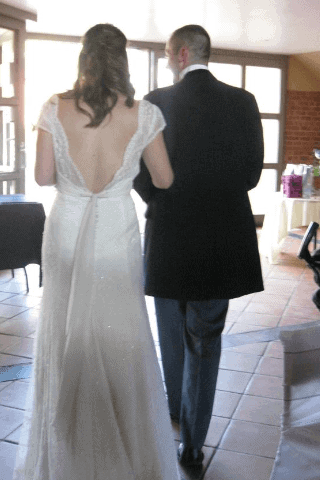 This week’s Beginning of Us story comes from the very lovely Natalie over at Plutonium Sox. She’s someone I’ve got to know so well over the last couple of months and she is definitely one of the most honest and likeable people I have met through blogging. Here’s her story of how she met her Husband:

In July 2007, I was in a relationship that was clearly going nowhere. Worcestershire was under the worst flood water we’d had for many years, and I was concerned about how I was going to get to Birmingham airport to fly to Venezuela in two days time. It was in this somewhat distracted state of mind that I wandered aimlessly into the office to start a new job.

On day one, my boss explained that whilst everyone worked together regularly, I would be expected to work predominantly with the person on the same shift pattern as me. He was experienced in the job, the perfect person to take me under his wing and show me the ropes. Except that he didn’t.

He was loud, gregarious and loved to be the centre of attention. Just the sort of person I hated. Luckily, it was easy to ignore him. He seemed to go out of his way to have a laugh and a joke with everybody except for me.

Two days later after a harrowing trip through flood waters to the airport, I was finally on the plane to Venezuela. Despite having been excited about the opportunities my new role would bring, I sat down on the plane full of relief that I didn’t have to think about it for a few weeks.

At the end of an amazing holiday, I was filled with trepidation at the prospect of returning to the office. This experienced member of staff who was supposed to be helping me was intimidating, rude and quite frankly a bit of a bully.

A few weeks in, nothing had changed. On the days when it was just the two of us in our department, he would go and work with somebody in a different section, leaving me to get on with it on my own.

The rest of the time, there was always an excuse to avoid me. An important job, a tea round that I wasn’t included in or just a conversation that I wouldn’t understand.

In the office, I naturally migrated towards a friend who I’d worked with before. One day on the way to visit a client, my friend asked me how I was getting on. I explained that I was enjoying the job, most of the people seemed great and I was learning quickly. But I told her that I hated being on a shift pattern with the one person who was point-blank refusing to have anything to do with me. I’m not a naturally outgoing person so starting in an office full of people I didn’t know was a big deal.

Being treated like this was making it so much more difficult.

I didn’t ask my friend not to mention how I was feeling because I didn’t really care who knew. I didn’t like the man and I’ve never been one to pretend otherwise. Within a couple of days, something changed. Instead of being excluded at every available opportunity, the person on my shift started to chat to me. Eventually, we worked together on jobs outside of the office. This forced us to make civil conversation and against our better judgement, we got on quite well.

One evening, my friend and I were driving to swimming training and I found myself telling her how there was someone at work that I got on really well with. We were just friends of course, but being around him was easy and natural. He made me laugh and I was leaving work happy.

Eventually, we started to associate outside of work. We’d walk the dogs together or go for a run.

Soon, we sort of fell into a relationship despite ourselves. Then one day I realised it was a few weeks since I’d been home and I was living out of a bag. He said that I might as well move in, so the next day I turned up with a wardrobe.

By the middle of 2008, we were in a serious relationship and decided to travel around New Zealand together on the back of a motorbike. This was make or break. We had our first and last ever argument when I said he was uneducated. To this day – one marriage, three dogs, three cats and two children later, we still go back to that same old argument every time we want a row.

We’ve been together for eight years now and I still wouldn’t have a good word said about him. But despite it all, we’re still going strong and I wouldn’t have it any other way.

Thanks Nat for sharing your story. It just goes to show that sometimes the most unlikely of people end up being completely right for us – even if they drive us up the wall!