When I was brainstorming new slow cooker fudge flavours to try, Colette suggested Amaretto and Cherry as one of her favourite chocolates is the Cherry Deluxe from Hotel Chocolat. With a mix of an Amaretto ganache and cherries it sounded like a winning combination – and one I couldn’t wait to experiment with.

What chocolate should I use for the Amaretto and Cherry Slow Cooker Fudge?

I have now made this fudge a few times, always with a different mix or milk, white and dark chocolate. Whatever mix I use, as long as it’s 700g in total, the recipe works beautifully and the only thing that changes is the colour of the finished fudge.

For the fudge in the photos I used 500g milk chocolate and 200g white chocolate as per this recipe. But, for a darker fudge, you can switch some of the milk chocolate for dark chocolate. You could also make a white Amaretto fudge by using all white chocolate if you prefer. Really though, whatever chocolate you use will make a really delicious fudge that everyone will love.

How much Amaretto do I need in this Amaretto cherry fudge?

This cherry Amaretto fudge needs a good amount of Amaretto to give enough flavour to it. I initially tried one tablespoon of Amaretto like the tablespoon of Baileys in our Baileys fudge recipe but it didn’t give the same depth of flavour. But, two tablespoons works perfectly and isn’t at all overpowering.

If you add more alcohol to your fudge make sure you add more chocolate to compensate otherwise the ratio of chocolate to liquid won’t be right and the fudge won’t set properly. Making slow cooker fudge is a bit like science!

If you don’t want to use alcohol in this Slow Cooker Amaretto fudge recipe you can buy an Amaretto syrup or flavouring to use instead of the Amaretto liqueur and it will have much the same results.

You can also use as many glace cherries as you like. We used 300g for this recipe but you can use more of less depending on your preference. You could also leave the cherries out completely if you’re not a fan or switch them for something else – maybe dried mixed fruit to give a more seasonal taste to the chocolate Amaretto fudge or even drained maraschino cherries.

Why should I make slow cooker fudge?

Slow cooker fudge is quite and easy to make, it’s fantastic to give as gifts and lovely to share at any time through the year and there are so many different flavours to try too. Different fudge options have become some of our favourite slow cooker recipes.

Slow cooker fudge keeps well in the fridge, in an airtight container for a couple of weeks. The flavour matures over the first couple of days of it being in the fridge so you get the full Amaretto flavour after it’s been in the fridge for a few days.

Can you make microwave Amaretto fudge?

If you’d like to pin or print this Amaretto and Cherry Slow Cooker Fudge for later you can do so below. Happy baking! 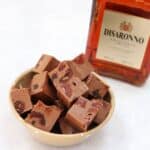