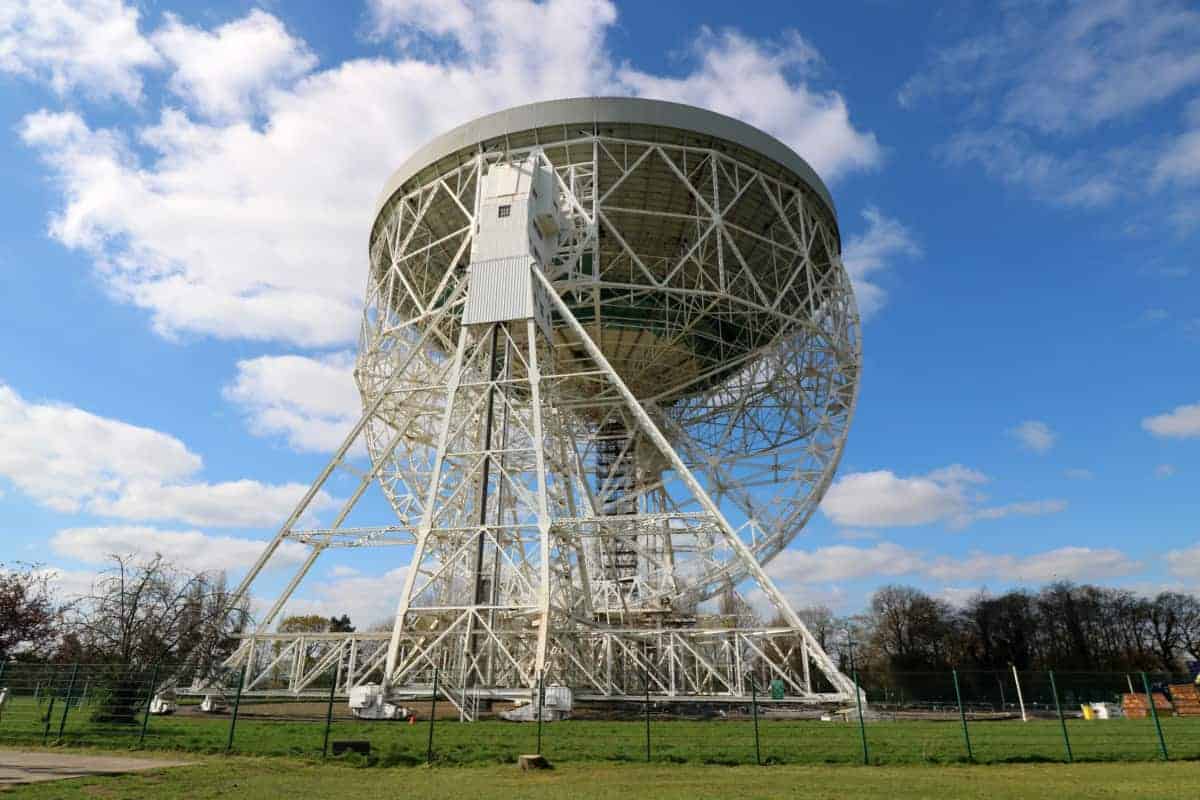 During the Easter holidays, we spent a week with friends at a lovely cottage near Stoke on Trent. We planned some big days out but on some days we just took a vote the evening before and made our way. With four young children eager to learn new things, we decided to visit Jodrell Bank Discovery Centre in Cheshire. It’s also known as the Jodrell Bank Observatory and is actually now part of the University of Manchester.  In 2018, the observatory became a candidate for UNESCO World Heritage site status.

The central part of the Jodrell Bank centre is a giant radio telescope which you can see from miles around. It’s known as the Lovell telescope, after Sir Bernard Lovell, and has been a feature of the local landscape for more than fifty years. However, there is much more to Jodrell Bank than the ginormous white bowl that dominates the site.

As soon as we entered the estate, there were signs requiring people to turn off their mobile telephones, as any sort of electronic signal interferes with the sensitive equipment being used. We duly obliged, which turned out to be quite refreshing.

There was plenty of space in the large car park and we made our way into the reception area, which is known as the Planet Pavilion. It contains a gift shop and café, and is home to the world’s largest clockwork model of our solar system.

After paying, we were directed outside to hear a little bit about the interactive shows on offer and to book seats for the ones we wanted to see. We reserved seats to see ‘Its Elemental’, a science show aimed at ages 7+. It came with a warning that said it may contain loud bangs which made the children even more excited! As we had some time to kill, we went for a walk around the grounds and found several physics based experiments including whispering dishes and interactive exhibits about the solar system.

When it was time for the show we made our way into the Star Pavilion and found some seats in the auditorium. There were two large TV’s hanging either side of the stage, showing what else was on throughout the year. We found out that Jodrell Bank is even home to an annual music festival. Soon, actual scientists came to the stage and we were in for a real treat. There were explosions, sparks and even green and blue fire. It was very well put together with a close up of the experiments on the large overhead screens. The children thoroughly enjoyed it, as did the adults.

After the show, we picked up a reasonable priced coffee and found a nearby picnic bench to sit and enjoy our picnic lunch in the sun. There was another representation of the solar system in the picnic area and the children were amazed by the scale as it went round a very large section of the grounds.

We had reserved seats for another show aimed at under sevens but it wasn’t for a while so we spent some time in the Space Pavilion where we learnt all about how the scientist use the Lovell telescope to scan the skies, how the big bang jump started the universe and even about black holes and other interactive activities.

We explored the Galaxy Gardens next, making our way to the children’s play area where we could have spent hours. It was next to an area that is currently fenced off, but the site is constantly being improved so couldn’t be helped. The play area wasn’t the biggest but it kept the four children entertained.

Soon it was time for our last show – Get Set, Blast Off! This was back in the Space Pavilion and when we got there we found creative activities for the children like colouring in, dot-to-dots or simply reading.

When the show was ready to start another actual scientist came out and played games with the large group of children who had gathered. She taught them all about the planets in our solar system and encouraged the children to go crazy when ever she mentioned a particular planet! The session ended with a parachute game with the aim trying to keep models of the Sun within the boundary and then trying to run underneath the parachute when your favourite planet was mentioned. Each child who took part came away with massive smiles on their faces.

Everyone really enjoyed the day at the Jodrell Bank Visitor Centre and it was quite a different day out to what we usually do. It was educational, interactive and lots of fun. Plus, it was great value too. So many people have said to us that they don’t live that far from it and keep meaning to go so, if that’s you, definitely make the trip.

You can find out more about visiting, and ways to support Jodrell Bank over on their website. For reference, their address is: Jodrell Bank Discovery Centre, The University of Manchester, Macclesfield, Cheshire, Sk11 9DL