Now, this Slow Cooker Terry’s White Chocolate Orange Fudge is a little softer than other fudges we’ve made. It’s still firm to cut up but it definitely has more give in it than normal. The reason for this is that I didn’t want you to have to buy another chocolate orange just to add half of it to the mix – and I love the softer fudge anyway. But, if you like it firmer you can add another half a chocolate orange or 100g of white chocolate, chocolate chips or even a 100g bar of white chocolate orange.

Can I make this easy fudge in the microwave?

If you don’t have a slow cooker you can make Terry’s white chocolate orange fudge in the microwave but I prefer using the slow cooker as I feel like I have more control over the mixture. If you make it in the microwave, add the ingredients to a microwavable bowl and heat in short bursts until the right consistency is achieved.

I have seen many people make choc orange fudge and add orange extract, orange icing to the top using icing sugar, orange food colouring and orange zest. You can do that too if you like but I wanted to really just give the option of a basic and easy two ingredient fudge recipe that you can then switch up however you like.

How long does slow cooker chocolate fudge keep for?

I love making fudge and it is fantastic to give as gifts – home made fudge presented in individual gift bags and tied with a ribbon. They’re something the whole family will love, sharing out the chocolate orange fudge squares over the festive season.

If you’re looking for other fudge recipes to try at home you can find our full range of flavours here. Some of our other favourites for the festive season are our Rocky Road Fudge, Cherry Bakewell Fudge and Mincemeat Fudge. Enjoy!

If you’d like to pin or print this Slow Cooker Terry’s White Chocolate Orange Fudge recipe for later you can do so at the bottom of the page. Happy baking! 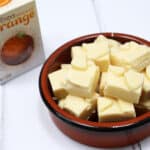