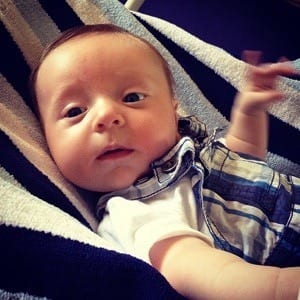 Little Man is now officially 3 months old. Those three months, at times, seemed to be going ever so slowly – some weeks felt like a year, but now that we are out the other side of those weeks I can safely say that the last 3 months have been the quickest of my life.

It’s only now that I can see how incredibly hard parts of the first few weeks were. Little Man would cry, properly, for up to two hours before he pooped. He would also feed constantly, as all newborns do and then throw up the majority of the feed. Some days this would happen after every single feed. The feeding also wasn’t the painless experience I was expecting second time around either, there was still initial soreness but it definitely hurt less than it had the first time I’d breastfed. Little Man would feed every 1-2 hours throughout the day and night and it felt like it would never end – every feed merged into the next and with LP to look after too it was truly an exhausting experience.

Now I can see those weeks for what they were and all the way through I kept telling myself something that all parents will have told themselves at some point “It’s just a phase”. Well, as all parents that have thought it will know, it turned out to be true – the phase has passed!

Little Man now poops without issue, although he has the hugest, noisiest poos known to man! He also vomits rarely and breastfeeding is now a lovely experience. He also now sleeps generally for 4hrs, 3hrs then 2hrs at night! I have no idea when this all happened but by 3 months Little Man is now an absolute joy to be around and look after – it has become so much easier!

If you’re a new parent and your baby is a few weeks old, it gets easier! I promise. I can’t tell you when, but they’ll get to three months old and you’ll suddenly realise that IT IS easier!

Little Man now plays happily on his playmat for half an hour at a time. He smiles, makes noises and watches you as you move around the room. He has become so much more interactive and it really is lovely to see his personality starting to develop.

LP adores her Brother, she loves him completely and shows it constantly – kissing him, cuddling him and squealing at him in pure glee. LP is in awe of her little Brother and it really is amazing to see their bond already developing – he held onto her leg earlier today, constantly watches her and smiles at her too! Their love for eachother is definitely mutual.

When we were pregnant we had a lot of comments that we’d have our work cut out and that having such a small age gap (21 months) would be difficult. Yes, those first few weeks of changing 2 lots of nappies and trying to find our feet with a new routine were really hard. Now though, it’s not difficult anymore, it’s just life. This is the way it is. We have two lots of nappies to change, frequently have one moaning baby whilst the other one is being sorted, solo parenting evenings of dinner/bath/bed when Dave’s working use up every ounce of my energy and taking both children out and about together takes a lot of organisation. But, it’s not difficult really, it’s just the way it is when you have two children and I am so glad we have the age gap that we have. There has been zero jealousy from LP – She’s too young to understand jealousy really, and she has just adapted amazingly. I am so happy with how things have turned out and so proud of the way LP has dealt with the changes in her life.

Little Man is 3 months old. Halfway to weaning and a quarter of the way to his 1st Birthday! They say that time goes so quickly when you have children and they weren’t kidding. What they don’t tell you is that it goes quicker with every child that you have. I’m not going to lie, over the past 12 weeks there have been times when I’ve wished it away, generally at 2am when Little Man hasn’t let me put him down all day, I’m exhausted and he’s just vomited on me, him and his bedding for the fourth time in an hour. But those days are behind us now and there’ll be no more wishing it away from me – I’d love to savour every minute from now on!

Are you in those first 3 months or are you out the other side of them? Are you enjoying parenting or finding it incredibly tough? I’d love to hear your situation and what stage you’re at with your babies.