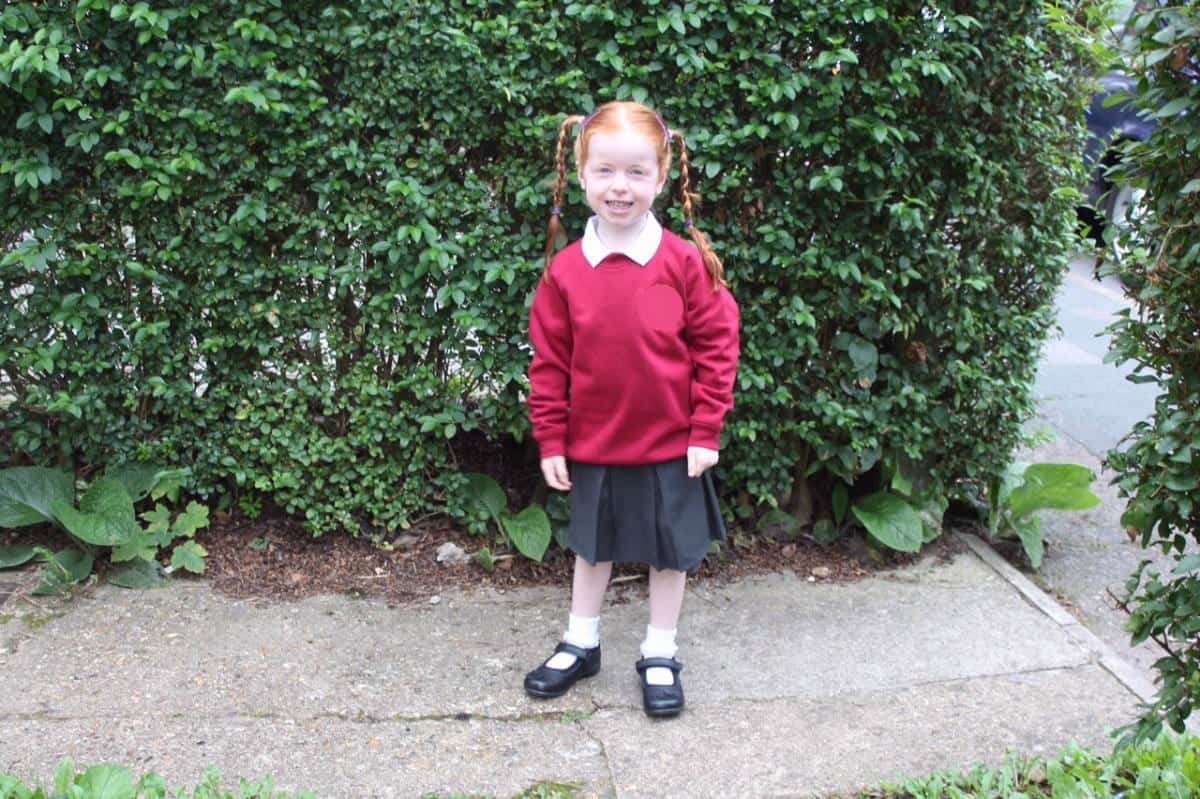 Over the last few months there has been a lot of talk in the news about summer born babies and delaying their start to school. As LP started school in September, a matter of days after her fourth Birthday, I thought I should take a moment to reflect on how she has coped with school and ultimately whether I would have done anything different if I had the opportunity.

When I was pregnant with LP and due on 25th August I didn’t think anything of it. If anything I thought how nice it would be to have a Birthday in the school holidays, never having to go to school on your Birthday. It was only teacher friends that pointed out that September babies have another whole year at home before having to start school but even then I didn’t pay much attention to what this actually meant.

We applied for LP’s school place as soon as the applications opened and really we knew that she would get accepted into our preferred school – the one she was already attending nursery at and the one closest to us. We found out in the April that she would indeed be going to that school and started to prepare – buying uniform, labelling clothes and thinking about the days without her at home, how I would fill those six hours each day.

The four months before she started school felt like a grieving process. I was so sad that our days of having our first born child at home were coming to an end. I reflected on all the things we could have done and tried to cram in as much as possible to make the most of the time we had left. It was like a big black cloud looming over us.

Then there was LP. She was so excited to be going to big school. She tried her uniform on with pride and she told everyone about this new adventure in her life. She was moving across to the main school with lots of her nursery friends and having been to parents evenings at the school we knew it would be a smooth transition for her.

But there were still worries. LP often came out of nursery at lunchtime needing the toilet or having just wet herself. She needed prompting to go to the toilet or would often have accidents. She couldn’t get herself dressed and had never shown any interest in holding a pen, let alone writing with it. She didn’t know what letters were, what they looked like or the names of them and only knew a few numbers – our front door number and the numbers on lift buttons.

Even with these worries we focused on LP’s amazing personality, her impeccable manners and her huge imagination. Her preschool years had been all about learning through play and making sure LP could do the basics of everyday life – using cutlery, wiping her bum and saying please and thank you. We had always thought that there was plenty of time for her to learn the academic side of things and I am still really glad her youngest years were all about having fun.

But at the point LP was due to start school I have to admit I was concerned. I had worried for the whole of the previous year about how she would deal with school, how little she would be, whether she would keep up with the others and whether she would just be too tired to deal with it all. I had all the worries any parent of a summer baby has, and like all those other parents my worries were hugely magnified by the media telling me that my summer baby wouldn’t do as well in exams, would always be behind and would spend her whole school life just trying to keep up.

We are now a whole term into LP’s school life and applications have just closed for the next intake of school children. There’s all the same talk on social media and in the news about what’s best for summer born babies and there are many reports of having a fight on your hands if you want to keep your child back a year so they start school when they’re five.

I look back at the last year and wonder what we would have done if we were given the choice of keeping LP back. Would we have kept her at home for another year? Would we have had another whole year of blissful preschool days? Or would we have sent her to school regardless?

Whatever we would have done is irrelevant as we didn’t have that choice. But a term into LP’s school days and we are amazed that the little girl in her school uniform each day is the same tiny one that started school just a few months ago.

LP can not only hold a pen now but can write the names of her whole family with no help. She knows the alphabet and the sounds of each letter. She can recognise her name and spells it with ease. She also knows numbers and can count to one hundred with minimal prompting.

LP has made so many friends and her social skills have come so far. Her manners have improved even further and she has a vocabulary that we are so proud of. Her imagination just keeps growing and she talks non-stop about life, the universe and everything. She is very much a sponge, soaking up every single thing that she learns at school and telling us about it later, asking questions and wanting to learn even more.

The only slight blip we had with LP starting school was that as far as toilet accidents went, she just wasn’t ready. She would need to be told to go to the toilet and often she would come out of school having wet herself just a moment before. But something seems to have clicked over Christmas and we no longer have this issue – and that purely needed time which both us and the teachers were happy to give her.

So really we’re pleased that LP started school. Although it felt like I was losing my first child to an academic world far too soon I know that we cannot stop the inevitable and that at some point all children have to get an education. For us, in hindsight, LP starting school was the best thing to happen to her. She loves going to school and has grown so much in so many ways. She still thinks of school as one big adventure and I hope her love of school continues to grow.

If your child is due to start school in September and you have a summer born baby then you have a decision to make. Do you carry on as all the previous years, send your child to school shortly after their fourth Birthday and hope that they flourish? Support them, encourage them and help them to learn. Or do you defer your child’s entrance to school, keep that at home for another year and cram every single day with making as many memories as possible before they start school, helping them to learn through play for another year and savouring every moment before your child starts school?

There is no right or wrong answer but whatever decision you make, make it for the right reasons. Whatever age your child starts school and whatever month they were born you will feel like you are mourning. You will dwell on the years before and you will feel sadness that those years are over. But keeping them at home  for another year purely to make those years last longer is not the answer.

If you have just filled in your child’s school application enjoy the next months until you have a whole new routine, until your life is filled with term time, weekends and school holidays. Each day is full of school runs, book bags and PE kits. Enjoy those months, savour them and make memories. Then, in September, dress your child in their school uniform that will be too big with room to grow, take a photo of them and feel so, so proud. Then drop them at their classroom to begin that next big adventure.