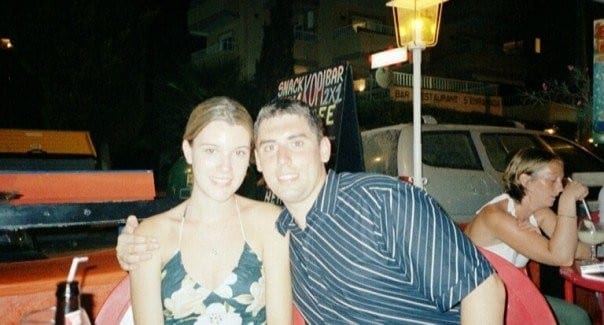 This week’s story comes from Mrs Lighty who you can find over on Sugar and Spice and All Things Spliced and also on her travel blog Answers on a Postcard. I’ll leave you with Mrs Lighty to tell her story…

Mr and Mrs Lighty met 13 years ago, while we were on holiday in Ibiza, although our Mums tell us that in actual fact, we’ve known each other since we were two as they used to take us to the same Mother and Toddler group – funnily enough, we don’t remember this!! We’d both just finished our A-Levels, and were on the obligatory end-of-exams-holiday, me with my girlfriends and Mr Lighty with the lads. I knew that my friend Mark, who we’ve both known since we were born (my Mum met his Mum at antenatel classes!), was going to be in the same resort in Ibiza with his friends at the same time as us girls, so we arranged to meet up. We had such a good time that first night that we met up every night after that!

Now, it would have been nice and simple if Mr Lighty and I had just gotten together at that point, but unfortunately, we both decided to date other friends of ours within the group first! Once we were back home, however, both of our relationships fizzled out, and our group began to go their separate ways as everyone headed off to university.

I started uni in September 2002, and found myself at home while all of my friends had opted to go away to uni. I started to spend more time with the boys, as they were all at universities and colleges closer to home, and got to know Mr Lighty really well. One night we were chatting over email when our conversation started to take a new turn. Mr Lighty started dropping hints that he liked me, but I couldn’t really comprehend this, particularly as we’d both dated each other’s friends, making me feel incredibly disloyal, and I thought that we were just friends ourselves. He literally had to spell out to me how he felt about me before I could believe it! We arranged to meet on our lunchbreaks from our Saturday jobs the next day, and so Mr Lighty took me on our first date to the glamourous destination of…our local BHS canteen!!

And so it began! After we’d been together for about two years, I went to live in Vienna, Austria, as part of my German degree. This obviously meant that we would be apart for an academic year, but at no point did we consider breaking up. I don’t think we ever even had the conversation about whether we should stay together or not, we just knew that we’d make it work somehow. And make it work we did, with Mr Lighty coming to visit me six times in Vienna, and me coming home four times. Plus we spoke on the phone practically every day! After my year abroad had finished, I think we realised that if we’d managed to get through being apart for 9 months, we could manage pretty much anything.

After I graduated in 2006, we took the next step and bought our (tiny!) starter home together, and our relationship has developed further and further from there. In 2009 we got engaged, we got married in 2011, and bought our forever home in 2012.

This year we welcomed Baby Lighty into our family! We couldn’t be happier, so here’s to another 13 years together and hopefully many more besides!

Thanks so much Mrs Lighty for sharing your story! It sounds like you have been together and accomplished so much – here’s to the next 13 years!