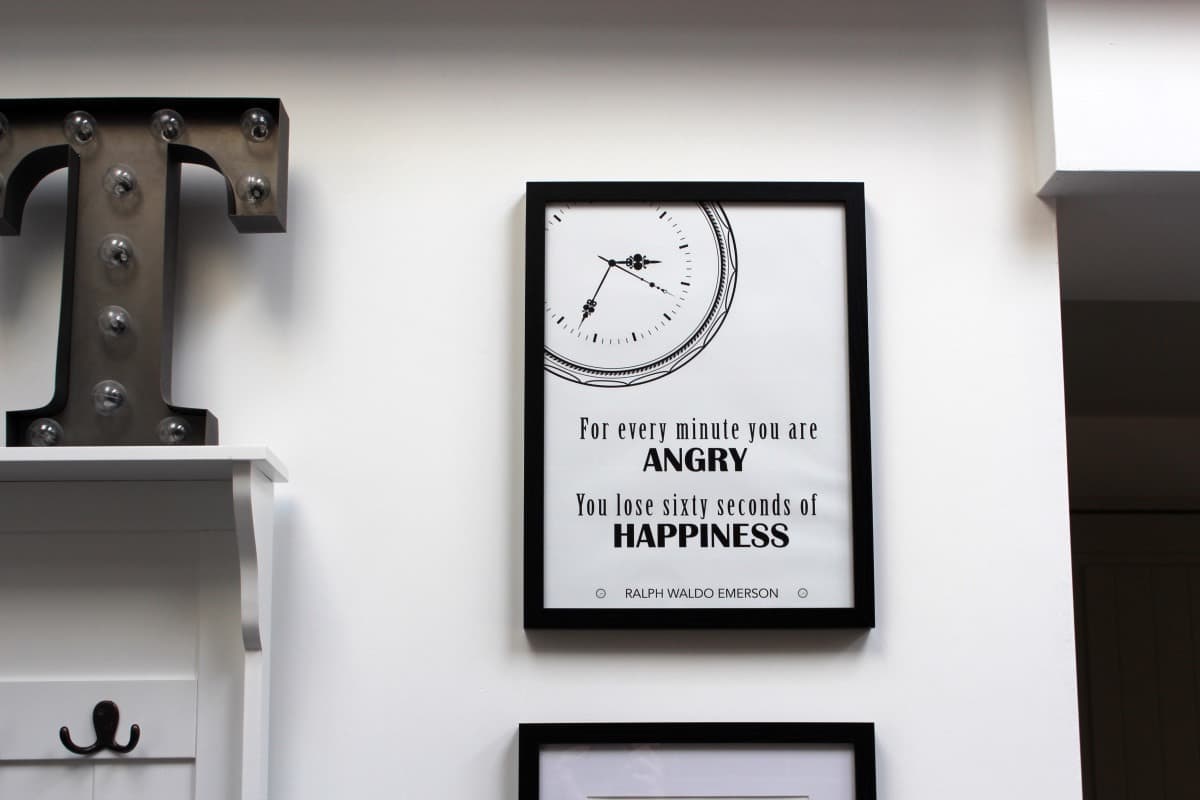 I realised, just before I gave up my day job last year, that I was stressed, emotional and often angry and frustrated at the smallest of things. When I left my job to be at home full time I took the opportunity to make a change. It wasn’t a conscious decision. I didn’t wake up one day and think that now was the first day of the rest of my life or anything momentous, it was smaller than that. I simply realised I was letting things get to me and in doing so I made the first step to just letting things go.

You see, in life there are always things that grate on us, annoy us and make us angry. When that white van parks in the last parent and child bay at the supermarket, when the queue at the Post Office is out the door and the self service machine isn’t working, when you get woken up at 9am on a Sunday by a Jehovah’s Witness at the door… The list is endless. But, these things – and so much more – used to play on my mind for hours. I would get wound up and it would effect my whole day. I’d be angry and I wouldn’t be very nice to be around – all because one thing added to another thing and before long all those little frustrations had turned into some massive mountain and I was being crushed under it. A whole mountain of frustration and anger.

But, I realised that every time something annoyed me – every time I missed a parcel by two minutes on the school run, every time it poured with rain just as I was picking the children up from school, every time a restaurant had run out of something I really wanted – every single time, the way I reacted was the way I had chosen to react. The fact that those moments stayed with me long after and the fact that they each piled on top of the annoying moment before, turning a bad couple of minutes into a bad morning, into a bad day, into a bad week – that was down to me. It was down to me and how I chose to feel.

You see, when that white van parks in the last parent and child bay they don’t even know I’m annoyed – they don’t even know who I am to care. They probably just have a five minute window to grab some milk before their next job. When the Post Office queue is out the door and the self service machine isn’t working the staff are so busy serving that queue that they don’t have time to fix the machine – and their thanks for waiting comment is meant sincerely, they didn’t break the machine on purpose, they didn’t make everyone come to the Post Office at that same point on a Monday afternoon – and they would probably prefer it if there was no queue and a woking self service machine too.

I realised that every day when things frustrated me, it was down to me and when I made a change it was simple – I was just going to let things go. And I have been so much happier since.

People will always park in the parent and child bays when they don’t have children with them but I can’t change those people so I just park in the next available space, do my shopping and get on with my day.

Our Post Office always has a queue and the machine is never working. I just make sure I go when I’m not in a rush, when I can spare that time. Just like the bank – which always has a queue too. I stand in the queue, I pass the time scrolling through social media and when it’s my turn I smile, tell them the queue wasn’t a problem – it’s to be expected, thank them and get on with my day.

Life is full of frustrations. You can literally find fault in everything if you try. But when something upsets you, annoys you or makes you sigh and shake your head – take a moment and, if you can, just let it go.

Sometimes it’s not worth lettings the little disappointments in life get you down. Life is bad enough at times without dwelling on the small things. I now ask myself whether something really matters, whether it effects me directly and if there’s any way I can change it. If it doesn’t really matter, it doesn’t effect me and I can’t change it or impact it in any way then I just move on.

I added this poster to our home recently and it really sums up my frame of mind at the moment. Life is too short to spend it angry – happiness is so much more important and I am done dwelling on the little things and the things I can’t change. Instead, I’m focusing on things that make me happy – and I’m just letting the rest go.