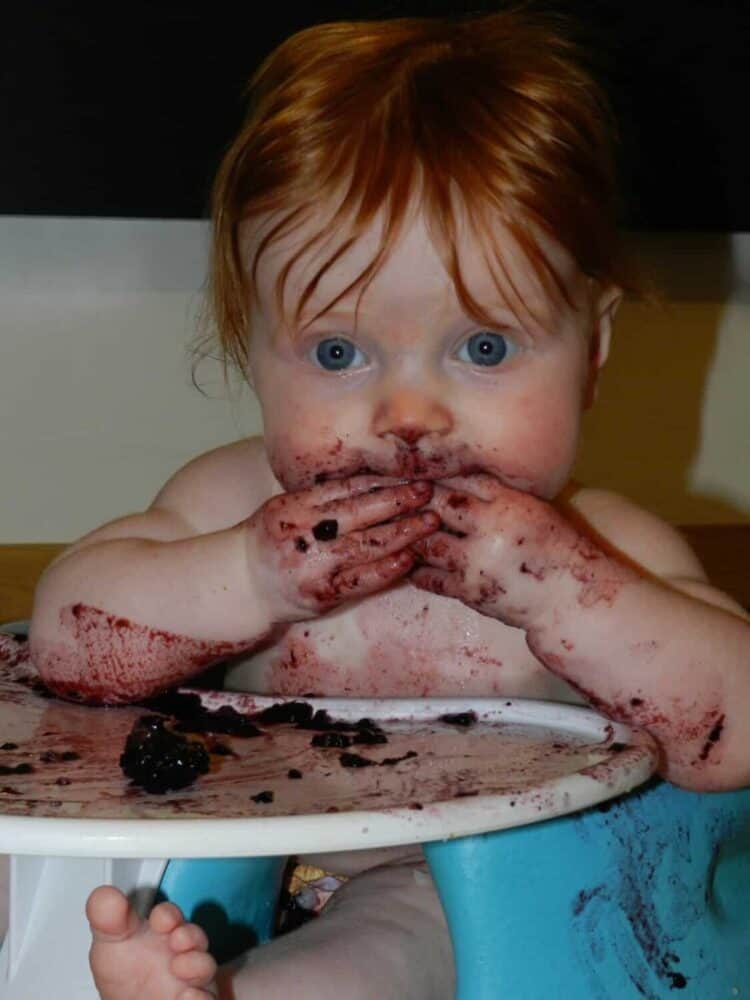 We saw a lot of family and a few friends over the Easter weekend and it amazes me how we still get such a wide range of comments and opinions regarding our Daughter’s weaning.

Most people that see LP eat are amazed at how she can not only get the food to her mouth, but also bite or suck chunks off and eventually eat whatever it is! They’re even more impressed when we give her a spoon, load it with yogurt and she manages to get it into her mouth and all the time she has expressions on her face that show she is truly loving the whole experience with food.

But then we get comments from people such as ‘Are you going to feed her purees too?’ I always wonder why they’d think we would do that. ‘Feeding’ LP in any respect would feel so wrong now, whether it was spooning purees into her mouth or anything else. Baby led weaning is so natural, and now LP really loves feeding herself. I think that if we were to try and spoon feed her now she would clamp her mouth shut, shake her head and get incredibly frustrated. LP is proving to be very independent and loves feeding herself and being in control of what she eats. I usually explain that we don’t need to puree feed, LP eats exactly what she wants and how much of it that she wants. If she needs to eat more, or needs more nutrients then she will get that from milk when breastfeeding. I then usually finish by saying ‘Food is fun until they’re one’, and that I will keep breastfeeding until at least this point so that I can be sure LP is getting everything she needs.

We were also told that ‘a little bit of Easter Egg won’t do any harm’. No, realistically, it won’t do any harm. It won’t hurt LP in any way. But she is 7.5 months old and doesn’t know what chocolate is. She doesn’t have anything artificially sweet in her diet and I try to limit the additives that she has. I also make sure when giving her food that we start with the savoury and work up to the fruit so that she has a balanced diet – if I gave her the fruit first she wouldn’t want anything else because of the natural sweetness of the fruit. Chocolate isn’t a necessary part of anyone’s diet. It is something that doesn’t have many good properties and so I feel there is no need for a baby to have it. ‘Oh…. She can have a little egg next year though can’t she?’ Of course, next year she can have an egg. Really she could have any size egg she wanted, because I am sure by that point she will know her limits when eating and won’t gorge on chocolate, but eat until she has had enough. No, I’m not going to withhold chocolate from my Daughter forever, I just feel that in the early months giving a healthy, nutritious diet is very important. Chocolate just isn’t part of that.

‘How can she chew without any teeth?’ This comment is usually followed by a laugh, or even a snort-laugh where they find the whole idea so absurd! Watch her eat and you will see how she chews, or better still, put your finger in her mouth! LP has always had a strong bite, but since weaning her bite is incredibly firm to the point that it can hurt. I have a friend who is weaning early so that baby can get used to eating solids… I honestly only feel this is necessary if the baby isn’t putting on enough weight and needs the solids. Otherwise you’re just making life harder for yourself. I am loving the weaning stage, but it is hard work. Sorting out food for another, all be it little, mouth, cleaning up LP, the highchair and the surrounding area three times a day. I am glad we waited until 6 months as the ease of just breastfeeding made life easier – which I didn’t really appreciate at the time. When weaning starts there is no going back, and everything will be that much harder – but still very much rewarding.

The stupidest comment I have had so far was ‘Has she had crisps yet?’ This is after having a comments a week or two ago of ‘Can she have Victoria Sponge? No? How about just the cream and jam then?’ I honestly don’t think that some people realise the amount of additives in the rubbish that they are eating. I would rather LP has cake than crisps – they may as well have asked if she’d eaten MacDonald’s yet! Obviously everyone is free to feed their children exactly what they think best and that is completely down to the parents. But why would anyone give a 7.5 month old crisps? There are such a great range of child snacks now that crisps are just unnecessary and downright lazy! What’s wrong with a bread stick? A rice cake? Veg sticks? It amazes me that anyone would even think that we may have given her crisps…The same goes for most products aimed at children. Petit Filous yogurts have so much sugar in them. What’s wrong with a couple of spoons of natural yogurt and some home made fruit puree? I know it takes a bit longer, but in the long run it would be cheaper and better for the child.

We now make all meals from scratch so that we know what’s in them. We use low salt stock cubes in everything that needs them and we make salt free bread in our breadmaker. We can’t afford to buy organic food, or a lot of expensive fruit, but I make sure that what I do buy is as healthy as possible for LP. I have found that cooking from scratch is so much cheaper than buying processed food – we regularly make meals in the slow cooker that are enough to feed 8 people for less than £1 a head, we then freeze the extra portions for a home made ‘ready meal’ at a later date. Since having LP I have a new love of cooking, there is a real sense of achievement in producing a lovely meal from just bare ingredients compared to heating something in the oven or on the hob,

I am hoping that next year we can work on our vegetable patch in the garden as it will be nice to have fresh, organic, cheap vegetables for our family. But one step at a time! For now I am happy giving LP a healthy balanced diet that is purely about giving her the best start in life and not about convenience.