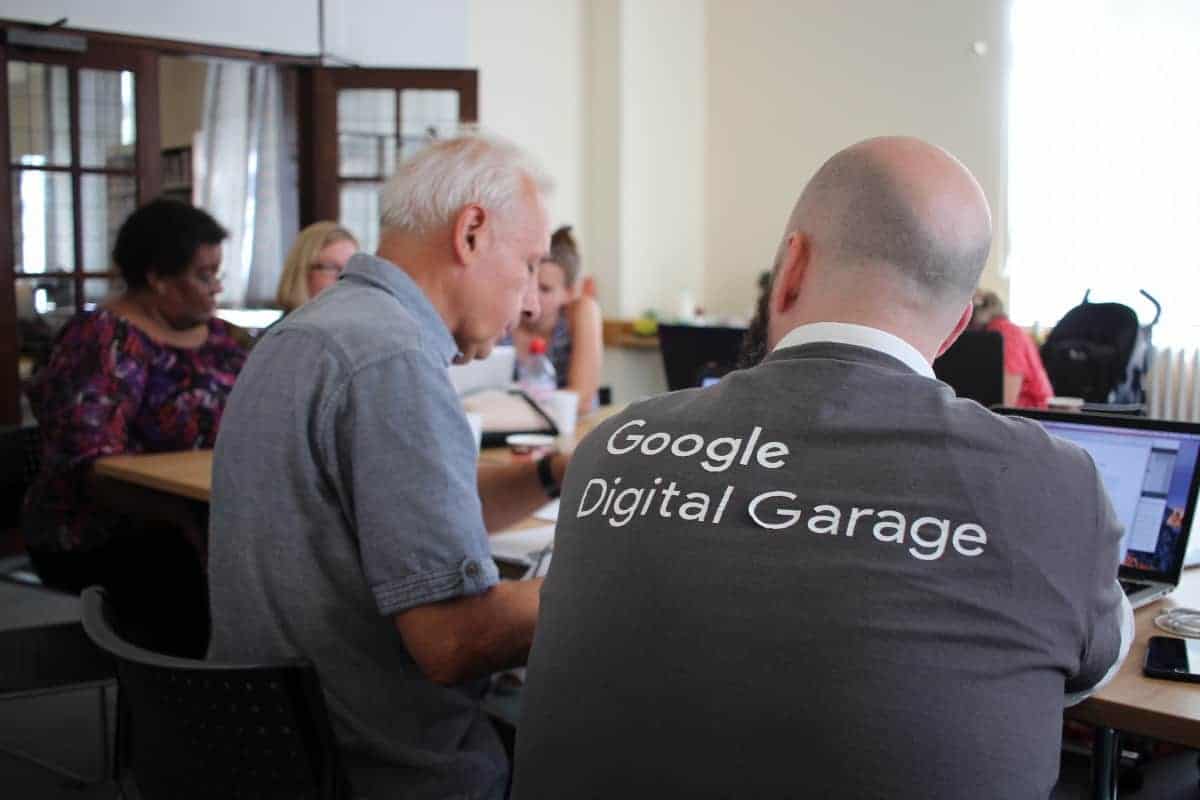 Last week I was invited along to a free Digital Drop In service run by Post Office Broadband in partnership with Google. They have organised these sessions across the country to boost digital confidence and as someone who spends their whole life online I was interested to see what sort of things people would need help with and whether there was anything new I could learn in the process too.

The Digital Drop In was held in Southampton’s Central Library – a vast and beautiful building in the heart of Southampton. It’s somewhere I hadn’t been before but I was blown away by the beautiful green surroundings and the sheer size of the library. We were given two rooms to use, set away from the more quiet areas of the library, where we could set up areas for people to talk to the Google experts about their digital concerns.

The session ran for three hours and was made up of a combination of pre-booked appointments and people just dropping in to find out more and get advice. What was apparent from the start though was that regardless of age, gender or ethnicity there is something digital that everyone needs a hand with. I spoke before about how I am clueless when it comes to smart technology at home and, because of that, I still like to go and turn my heating up using the thermostat rather than an app on my phone – yet I am a child of the digital era. I have grown up with the internet since my teens and I have seen technology come so far so quickly. But I still feel left behind at times.

One of our first attendees was a gentleman who literally had no digital experience. He didn’t own a computer – or even a TV. He had never used a computer and had never felt the need to, happily listening to the radio and reading a newspaper each day. So really, he came to see what, if anything, he was missing. We showed him how to use an iPad and then he spent the majority of the session browsing the internet and reading the news.

It’s not that surprising really that some people have avoided technology as much as possible but many find a time comes when they need to be online. They need to be able to access information only available on the internet, make bookings online and just keep up to date with products and services that are slowly but surely moving to being online only. For this gentlemen the session allowed him to experience what technology could bring to his life without having to spend a penny. I know he really appreciated the opportunity it gave him.

I helped another gentleman that had found the time had come to get online. He created an email address to keep in touch with his favourite book store when it’s London branch closed, leaving a remaining store in the States. Since then he had regularly used the library computers, never wanting or needing his own devices at home and instead popping to the library to check his email every so often. I helped him to understand his email account a little more – showing him how to add attachments or share links from the internet with the people he was corresponding with and he went away happy that he could use his email account more fully than before.

Until that point I hadn’t realised that I’d be able to help people with their digital confidence too. I am used to being online and because I have learnt everything so gradually it all comes quite naturally to me – and I often forget that other people may not know those same little things. So taking a moment to teach someone something, for no other reason than to share knowledge and to instil some confidence in them gave me a really great feeling.

Other people that came to the session needed help with pop ups. There are pop ups for everything now and knowing what to click – and what not to click – is quite daunting for some people so quite often they end up just turning off the computer and not clicking anything, just in case they get it wrong. I know this is a really common problem and one that can be easily fixed if you have the confidence to know which pop ups are normal and which to watch out for.

Someone else thought they needed a different device for different tasks – one for the internet, one for email, one for Whatsapp and phone calls… It was so eye opening for her when she realised that she could do pretty much everything she needed to do on one of her devices and she no longer needed to carry four different things around with her all the time.

Another attendee had an email account that was so full that it told her she had over four thousand emails – and she was painstakingly deleting them one by one – but always had that little red notification shouting at her from the corner of the screen, reminding her of all those emails sitting there. Getting rid of them for her was such a relief – and she now knows how to bulk delete in future and also how to unsubscribe to stop receiving unwanted emails in the future.

The help that the Google experts, as well as myself and the other bloggers at the event gave wasn’t anything huge – it was all things that were simple to fix and to teach if you knew how. But, everything we helped with didn’t just fix a problem but also gave that person confidence to do more online and with their devices in the future. The Google experts were really lovely people, down to earth and friendly. They could talk to the attendees in a way that was concise and helpful but without all the jargon. I think everyone learnt a thing or two that day in Southampton.

Our queries were so vast – from how to set up devices through to how to set up Alexa and get Alexa to connect to the internet at home. Some people needed help with apps or with their own laptop, storage issues, software issues or even not knowing where certain photos or files had disappeared to. It showed me that with this huge amount of technology we are faced with comes a huge amount of responsibility too – and a whole host of knowledge that not everyone is equipped with.

But, this meant that I came away from the Digital Drop In feeling so uplifted, like we had really helped people. And, until a few weeks ago I had no idea that sessions like this existed – and that they are completely free to attend too.

Post Office Broadband and Google have got a few more sessions around the country and then they are looking to launch even more sessions as time goes on. So, if you feel like you could do with some help in your own digital life or you know someone that could do with a hand – a friend, a parent or a colleague – see if you can make it to one of the next sessions. I can guarantee you’ll be welcomed by friendly faces, no question will be a silly one and you will get all the help that they can give. It will definitely be a positive experience.

The next sessions are:

You can find out more over on the Digital Drop In website.